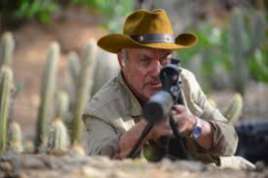 The plot takes place in the near future and tells the story of Teresa (Brbara Colen) who returns to Bacurau, a village in the semi-arid city of Serto Brazil, to attend her grandmother’s funeral. Arriving there, Teresa immediately saw signs that Bacurau was having serious problems. The basic contents are lost, there is a loss of cell coverage, the supply of clean water is blocked, and trucks carrying drinking water arrive with bullet holes. Soon, a corrupt government has left the village: Bacurau has not only been removed from the map, but its citizens have also been attacked. As the person in charge approaches, the villagers should complete an orderly match movement to avoid further damage.