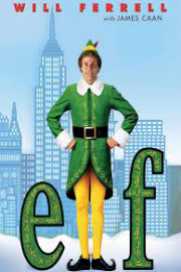 After learning that he is human, a man decides to raise an eleven year old child in the Arctic, traveling to New York to find his real father.
Director:
Jon Favreau Author:
David Berenbaum Star:
Will Ferrell, James Caan, Bob Newhart Buddy is a baby at an orphanage who sneaks into Santa’s bag and lands at the North Pole. Later, as an adult who happened to be raised by elves, Santa Claus allowed him to go to New York to meet his biological father, Walter Hobbs. Hobbs, who is on Santa Claus’s prank list as a heartless idiot, doesn’t know that Buddy was born. Meanwhile, Buddy experiences joy in New York City (and human culture) that only elves can. If Walter’s relationship with Buddy interferes with his work, he must re-evaluate his priorities.